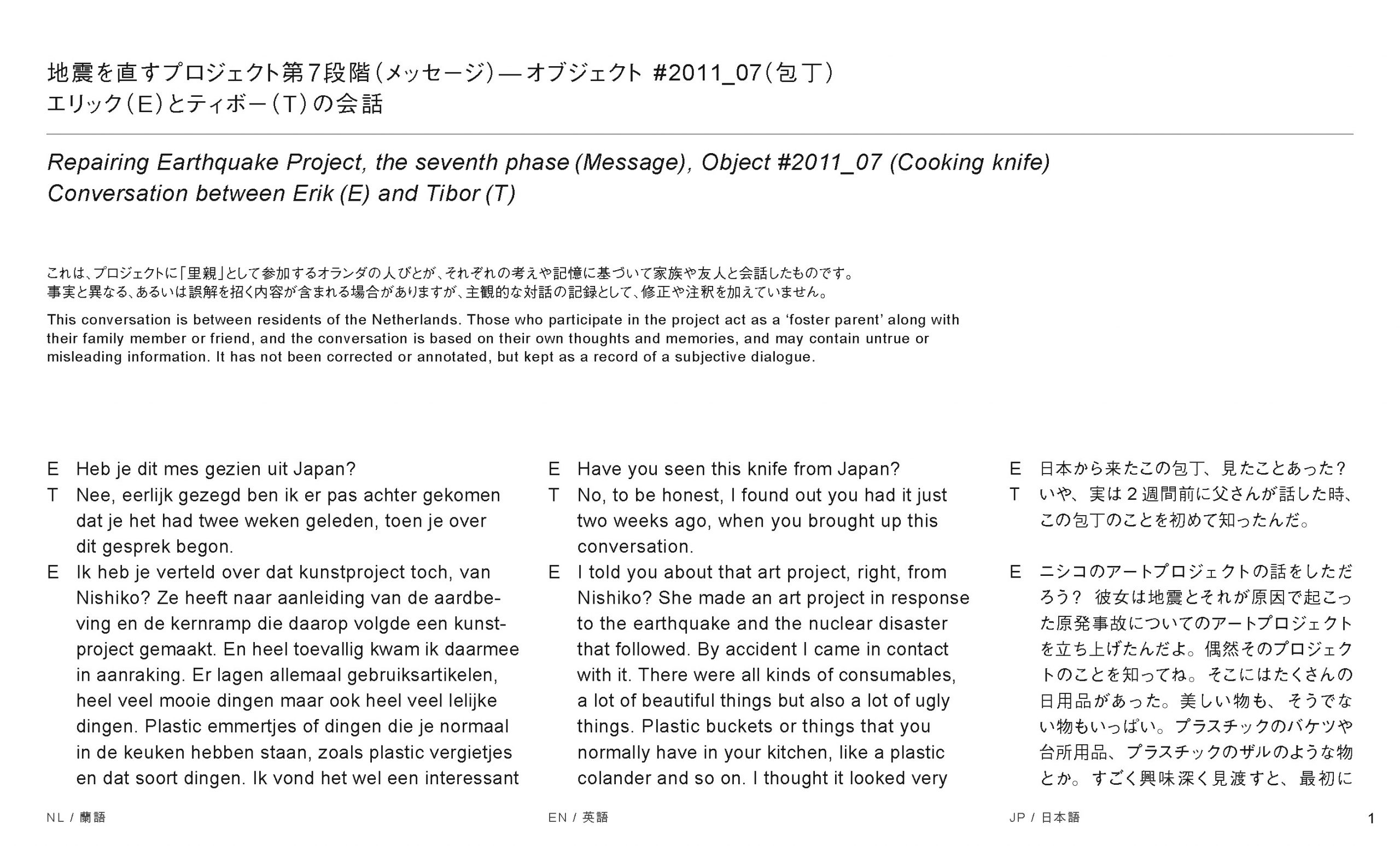 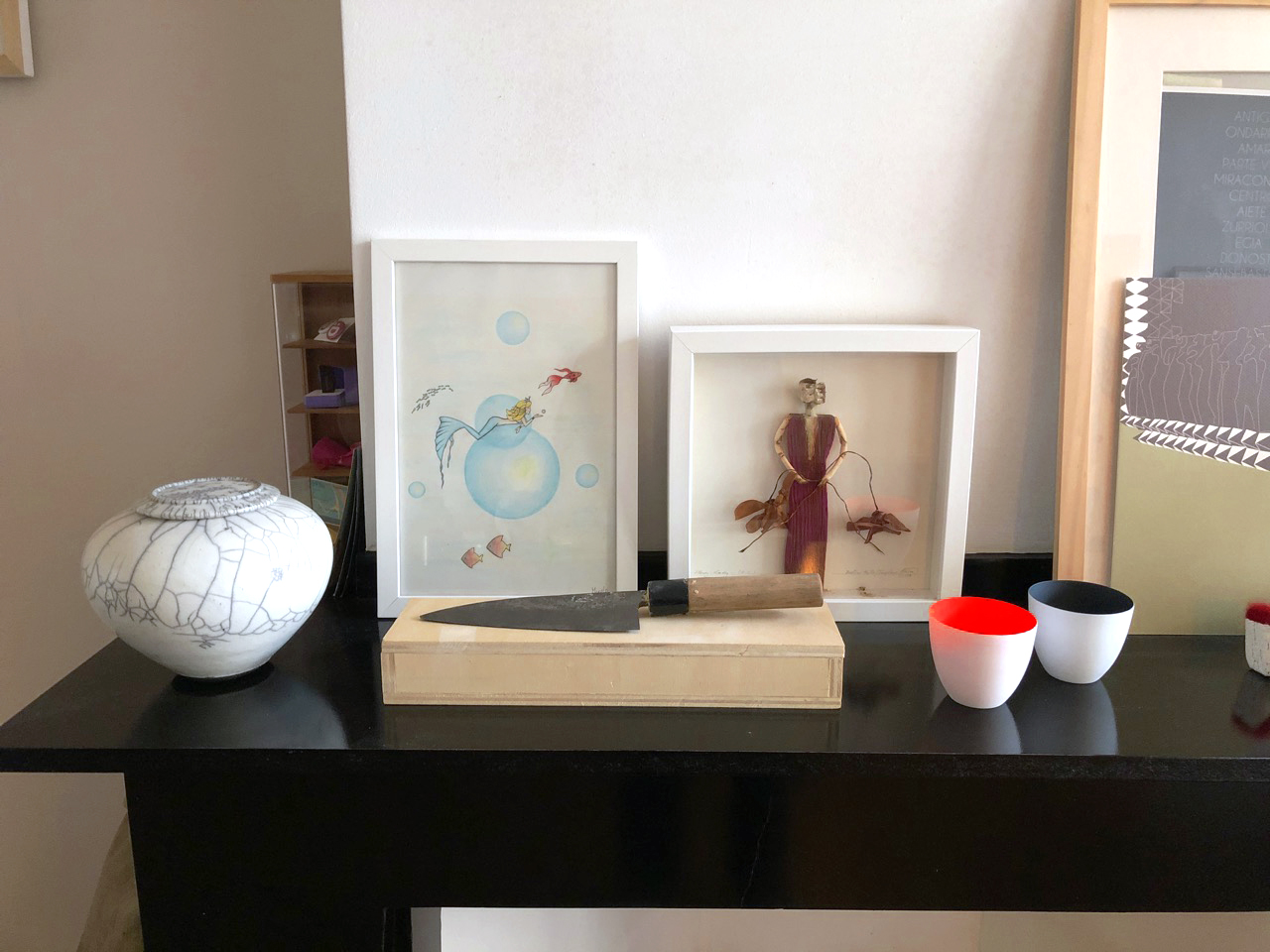 This brochure is part of the presentation by Nishiko for the exhibition Artists and the Disaster: Imagining in the 10th Year, at Contemporary Art Gallery, Art Tower Mito, Japan, 20 February–9 May 2021. The presentation has been made possible with the support of Mondriaan Fund, Embassy of the Kingdom of the Netherlands, and Stroom Den Haag.

During the exhibition Artists and the Disaster: Imagining in the 10th Year at Contemporary Art Gallery, Art Tower Mito, Japan

“Artist Nishiko is from Japan and has been living and working in The Hague for fifteen years.

In 2011, after the earthquake and subsequent tsunami in eastern Japan happened, Nishiko was so moved that she wondered where her responsibilities as an artist lay and how she could contribute to this poignant natural disaster that, given her Japanese background, directly affected her. She decided to visit the Tohoku region—the affected area. During this visit, Nishiko made a photo report and collected statements from eyewitnesses. She travelled to the affected area several times; visiting the same places in order to chart the course of reconstruction.

In Miyagi Prefecture, she collected objects that had been destroyed by the tsunami. During exhibitions in Yokohama (JP), Mito (JP) and The Hague, she set up temporary studios—sometimes in situ—where she repaired the objects.

The Repairing Earthquake Project, which has been running for ten years now, consists of several phases. Since 2013, she has been working on the fourth phase of the project, How to Store, in which, in order to preserve the objects, she has made a custom box for each object. Her studio in Billytown in The Hague is full of crates. In the fifth phase, Washed Ashore, Nishiko travelled to the coastal town of Tofino in Canada in April 2018. Here she investigated the remains that were still washing ashore seven years after the tsunami. The tiny pieces of plastic she found there sparked her interest in the phenomenon of microplastics; tiny barely visible pieces of plastic that pose a major threat to the environment.

The original owners of the repaired objects from the disaster area are difficult to track down. Thus, Nishiko has thought of sending the objects out into the world instead. Anyone who wants to, can adopt an object; it does not become their property, but they take the object under their wing. Some of the objects are now kept by foster parents in the Netherlands. These are often people who have visited one of her exhibitions or people who know Nishiko’s work well. They have signed an agreement in which, among other conditions, the objects have to be returned to the original owner in case he or she shows up.

In the seventh phase, Message, which is on display at Contemporary Art Gallery, Art Tower Mito, Nishiko brings stories from the Netherlands back to Japan. During the exhibition, three conversations with foster parents are presented.

One conversation is between an artist and her mother. She takes care of a shirt that Nishiko found near the former Tōna Station in Higashi-Matsushima. To get it clean, Nishiko has taken it to the dry cleaner. It is still in the dry cleaner’s packaging, neatly ironed, with a label attached stating that the customer acknowledges that not all stains could be completely removed. Their conversation has many personal connections to the object, and they fantasize about who the owner of the object might have been, while wondering what it would be like to see something that is yours again after such a long time.

Another conversation is between a singer and an artist. The artist is taking care of a bowl. He has given the object a special place in his house—on the waterfront—so that it can remain in contact with the water. They talk about how, because of Nishiko’s approach, the objects suddenly regain their right to exist. They realize that the repaired piece marks a particular moment: the moment the tsunami occurred.

And, a conversation between a journalist and an artist. Both are big fans of Japan and have visited the country several times. The journalist looks after a fish dish that Nishiko also found near the former Tōna Station. He remembers very precisely where and what time it was when he heard about the disaster. He also makes a comparison to the flood disaster in 1953, in Zeeland, the place where he comes from. He has the bowl in a cupboard along with many Japanese things and explains why he finds it so special to keep something tangible from the disaster.

All the stories are about their personal experiences, associations and compassion, which reflect an intimate look at the disaster through different perspectives. Nishiko believes that if the stories continue to circulate, the chances are greater that one day an object will be reunited with its original owner. The talks have been translated into English and Japanese and are available in a brochure.

The different phases of the project were presented  in various locations such as: The Penumbral Age in Museum of Modern Art in Warsaw (PL), Fellbach Triennial in Fellbach (DE), It Happens Anyway in W139 in Amsterdam, Klimaat als Mensenwerk organized by Satellietgroep in Electriciteitsfabriek in The Hague, Repairing Earthquake Project at Stroom Den Haag, Tsukumogami during Oerol festival in Terschelling, Intimacy / Chambres d’Amis at Marres in Maastricht, Artists and the Disaster – Documentation in Progress – at Contemporary Art Gallery, Art Tower Mito in Mito (JP).

Nishiko’s presentation at Contemporary Art Gallery, Art Tower Mito has been made possible by: Embassy of the Kingdom of the Netherlands in Tokyo, Mondriaan Fund and Stroom Den Haag.”

This publication has been made possible with the support of Mondriaan Fund, Prins Bernhard Cultuurfonds/Tijl Fonds, Jaap Harten Fonds, and Stroom Den Haag. 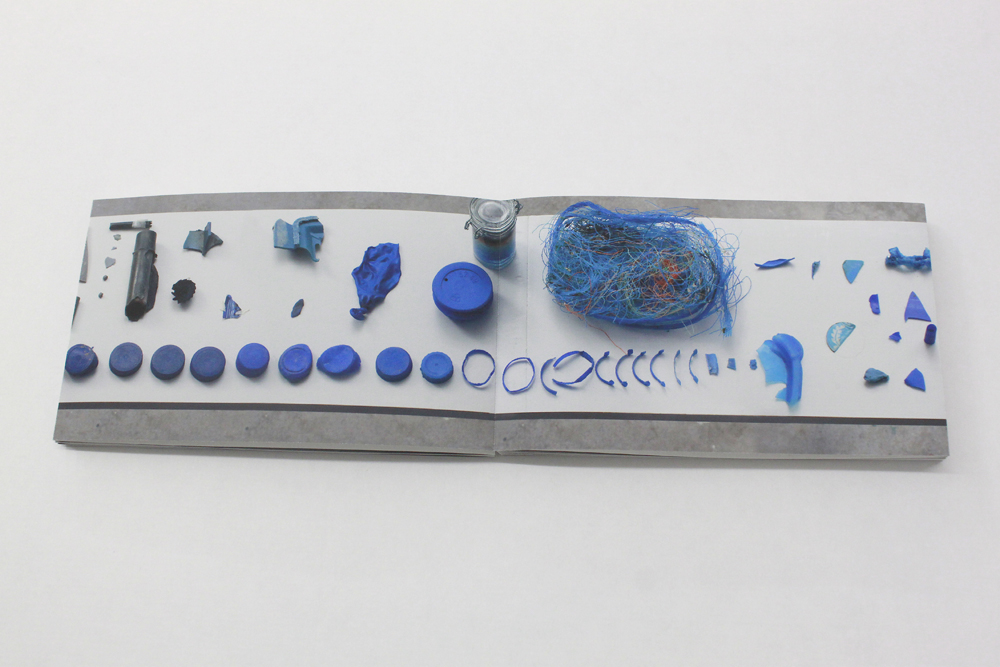 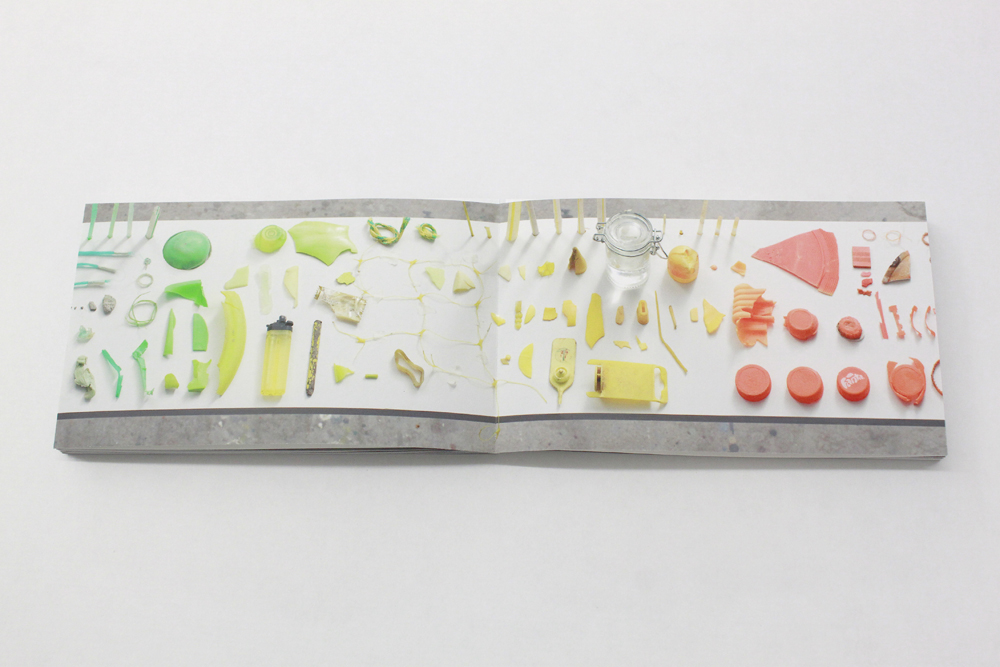 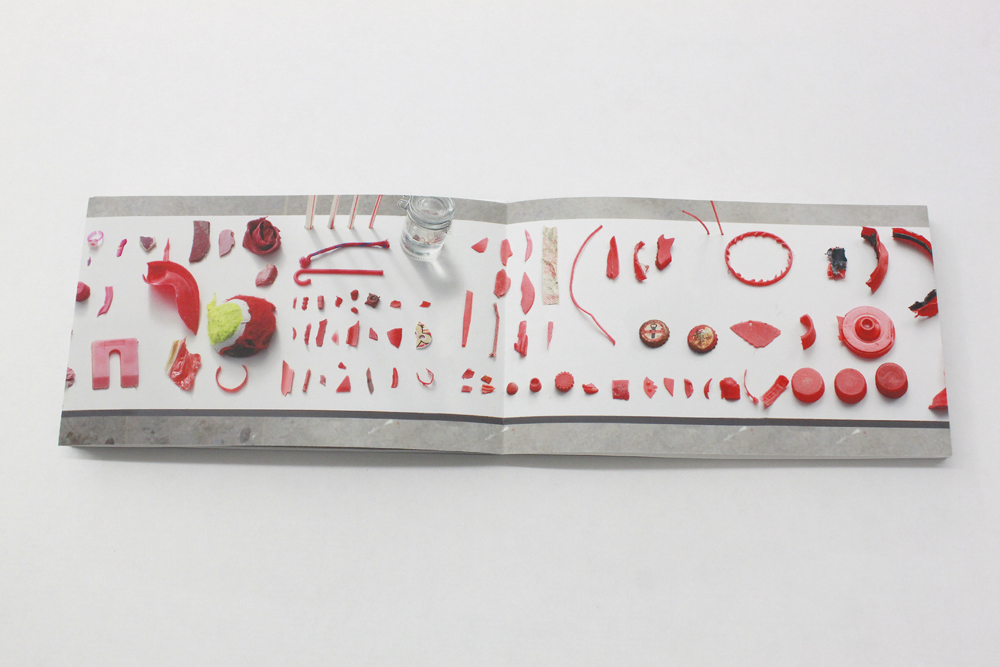 this publication is documenting the installation ‘Current washes ashore’, shown in the exhibition ‘Zeelust – Kustweek Zuid-Holland’ at GEMAK, 24 May to 2 June 2013, as a result of our residency at Badgast in Scheveningen, the Netherlands.

This publication has been made possible by support from Municipality of The Hague, Satellietgroep and GEMAK.
Special thanks to jhoeko and Yuriko Taniguchi.
And super thanks to Janneke Hendriks! 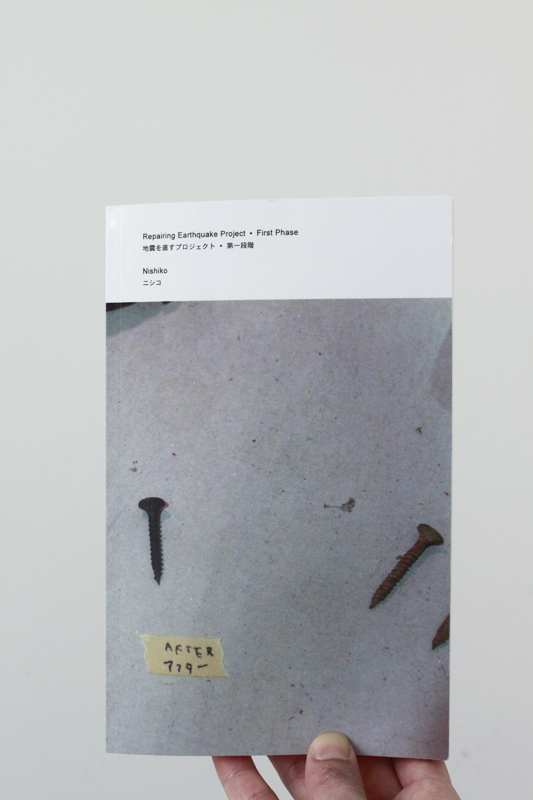 プロジェクト第１段階の活動をまとめた本をつくりました。オンラインで販売しています。売り上げはプロジェクトの広報に充てたいと考えています。
The book about the first phase of this project is available for purchase online. I would like to use the profit of this book to promote this project.